INDOOR All the Lonely People – Film Screening and Discussion 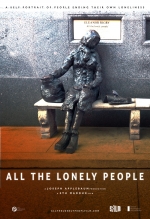 All The Lonely People is a presentation centered on a documentary film followed by an audience discussion with the filmmakers, which will take place virtually. It places a human face on the hidden epidemic of chronic loneliness and social isolation. Built on hope, it shares the latest research and interventions for individuals and communities and leaves audiences feeling empowered and reconnected.

Stu Maddux,  director of All The Lonely People, is an award-winning producer and director of non-fiction media with
international credits including Pluto TV, Here TV, PBS, Showtime, TLC, VH1, Spike,Logo, CMT, and BBC.  His work has been featured in The New York Times, The Atlantic, VICE, and NPR’s Morning Edition and exhibited at film festivals around the world. His honors include seven regional Emmy Awards. as well as awards from film festivals on five continents.

Registration is required for this event. To register, please provide the following information:

Email reminders are sent 48 hours before the event takes place.

If this event is canceled, we will use the contact information you enter here to get in touch with you.