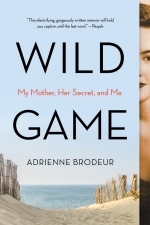 Adrienne Brodeur began her career in publishing as the cofounder, with filmmaker Francis Ford Coppola, of the National Magazine Award–winning Zoetrope: All-Story. She has worked as a book editor and is currently the executive director of Aspen Words. Her memoir, Wild Game: My Mother, Her Lover and Me, was published in October 2019 by HMH Books. Wild Game’s film rights were bought by Chernin Entertainment with Kelly Fremon Craig, the director of Edge of Seventeen, attached to adapt and direct.

On a hot July night on Cape Cod when Adrienne was fourteen, her mother, Malabar, woke her at midnight with five simple words that would set the course of both of their lives for years to come: Ben Souther just kissed me. Adrienne instantly became her mother’s confidante and helpmate and from then on, Malabar came to rely on her daughter to help orchestrate what would become an epic affair with her husband’s closest friend. The affair would have calamitous consequences for everyone involved, impacting Adrienne’s life in profound ways, driving her into a precarious marriage of her own, and then into a deep depression. Only years later will she find the strength to embrace her life—and her mother—on her own terms.

This is an online event via Zoom. An invite will be sent at least thirty minutes prior to the start of the program to the email given at registration. Please be sure to check your clutter/junk/spam boxes if the invite does not appear in your inbox.

Registration is required for this event. To register, please provide the following information:

Email reminders are sent 48 hours before the event takes place.

If this event is cancelled, we will use the contact information you enter here to get in touch with you.